Today is December 21st, the shortest day, the winter solstice. Solstice means simply ‘sun stands still’… and it was this apparent pause in the sun’s movements that added fire to our ancestors’ midwinter celebrations. So we’ll stand still too and while we wait for the longer days (tomorrow! Summer starts tomorrow! Almost…), we’ll do what they told Donald Trump not to do during the eclipse, and look at the sun.

Yule’s wheel of fire: meant to look like the sun, but doesn’t fool me.

Pretty much the oldest midwinter festival we know of is the Norse Yule. In snowy northern Europe, food-sharing at this time of year was a matter of survival – the rise of agriculture meant we could farm a surplus, so the smart thing to do was to use that to get through the winter and share the crops. Winter’s halfway point was the perfect time to pop a cork and celebrate that the days were about to get longer again.

But the festival also had a religious element too – it wasn’t a given that the sun would come back, so to lure it onward, wheels of fire were recreated here on Earth. By celebrating on the shortest day, the leaders were confident that the days should lengthen from there, so any worship would be mystically rewarded with more daylight before long. Some fires – like the Yule log – were burned constantly through the season, to show our defiance of the frosty weather. 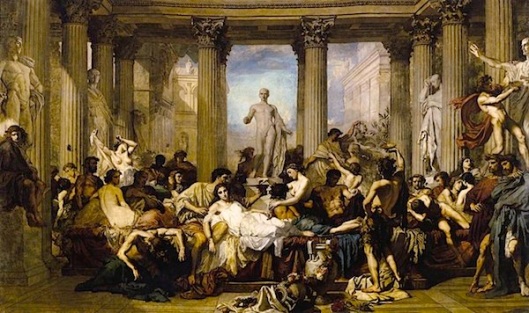 Yule’s chilled-out southern European cousin was Saturnalia, for the god Saturn. Ciao! Saturn was said to have ruled over a golden era of peace, when bumper crops meant no need to farm, or even for laws to govern people, since everything was in such abundance. Christmas through the ages has always harked back to supposedly greater times, and ancient Rome was no exception. The festivities were an attempt to recreate Saturn’s glory days, all part of the Roman love of nostalgia. They were conservative people with a notion of mos maiorum – the passed-down “way of the elders”. Werther’s Originals for us, Saturnalia for them.

Though the climate was kinder than oop north, the Romans still had harvests, so there was still a festival. The English would later think of a crazy title for such an occasion: “Harvest Festival”.

Saturnalia started with a bit of temple time then a big ol’ feast and games – so not that dissimilar from a Christmas of church then turkey dinner and charades. There were evergreen decorations too – ancestors of our Christmas trees and mistletoe. Perhaps the biggest thing we’ve lost was the topsy-turvy nature of the partying – masters serving slaves, the lowest becoming the highest, that sort of thing. It all made it very popular with all classes, and kept the Roman machine ticking along – keep the slaves happy, keep the world turning.

By the time Christmas came to England in the 600s, another cousin of Yule had already set in. St Bede reported in around 700 that “the Angli began the year on 25 December when we celebrate the birth of the Lord; and that very night which we hold so sacred, they called in their tongue ‘Modranecht’. at is, ‘mother’s night’.” This mother was not Mary, but linked to earlier pagan worship, a maternal festival.

When Augustine brought Christianity to bits of Britain around the turn of the 7th century, Pope Gregory the Great wrote to him advising not to replace pagan custom, but absorb it. So rather than sacrifice animals to old gods, or sometimes even the devil, the locals were encouraged to perform the same actions for the Christian God.

Old England was in love with its trees (anyone who’s been to a National Trust property can testify we still are). Just like the Norse and the Romans, English farmers hoped for the swift return of the nice weather for their crops. So in the west of England on “Old Twelvy Night”, farmers would celebrate with a “wes hal” – Old English for “good health”.

At the turn of the first millennium, “Wassail!” was the equivalent utterance to “Cheers!”, to be responded to with a hearty “Drinkhail!” The wassailing tradition was a crucial part of the farming calendar, and not just because drink and song maketh a mighty fine party. It was more about hopes for harvest and harking back to nature worship. Much of the cider wouldn’t be consumed (although much would), instead being daubed on the oldest apple tree in the orchard, with cries of “Awake from your sleep, tree!”

As Christianity became THE Roman religion (thanks, Emperor Constantine – he saw the sign of Christ in the heavens before battle, believed, won, and converted the whole empire), Christmas rose and Saturnalia and the other pagan Roman religions went the way of the dodo (which was still very much alive at the time. Probably…). By the fourth century, Christmas had its date of December 25th papally confirmed. As it grew and spread through the centuries like a growing, spreading thing, it gained bits and pieces of Yule, Saturnalia and Merrie Old English wassailing.

So yes, Merry Christmas, and God bless us everyone, but also Wassail, Io Saturnalia, and Yuley McYuleface.

This is mostly adapted from Amazon bestseller Hark! The Biography of Christmas, apart from Yuley McYuleface. That was to see if you’re paying attention.