“Oh why do I bother?” you’ll cry, as the superbly entertaining thriller glares from the TV screen at you, judging the paltry collection of words on your laptop. Nah, watch some trash instead.

But one benefit of doing script pass after script pass on my spec comedy-drama script, trying to knock the unfinished product into shape… was that Killing Eve reminded me of the Wobbly Stool of Greatness*. Never heard of it? No, I invented it, but it looks like this: 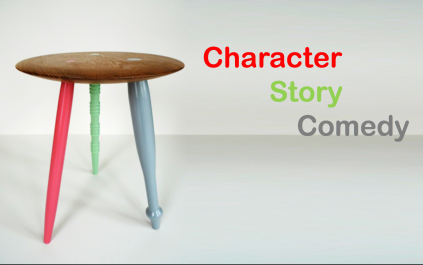 The Wobbly Stool of Greatness*: Beermats on standby.

If you’re a writer or wannabe writer or ever watched telly, you might be familiar with the concept though. Three things that make a watchable show watchable:

It’s first because it’s first. Our way into the show is via a person (or a dog or an alien, but only if they’re really person-like). We make a connection with that person – normally because we like them, or sometimes because we loathe them but find them charismatic. Even a show with a baddy at its heart has to have SOMETHING to warm to (see Dexter – the serial killer with a moral compass, or Basil Fawlty – a misguided monster whose put-upon-ness and hope endears us to him). Inversely, even ‘good’ heroes have enjoyable flaws. Would we watch John McClane as much if he was just a kickass action hero, rather than also being “two steps away from becoming a full blown alcoholic”? Like they say at the end of Some Like It Hot, “Nobody’s perfect.”

Other characters might reflect our hero – to highlight their characteristics, or show that they’re not as extreme as we think. Their differences will create story – which we’ll get to.

Every scene, every page, ideally every line… should reveal character. The age-old writing advice applies: cover up the character names – can you still tell who’s saying what? If everyone sounds the same, your lines aren’t characterful enough.

So when it comes to my script, I make time for a character pass. Make sure as many lines as possible reveal something about that character, and their unique attitude to the situation they’re in. If it’s not unique, make it unique.

If you watch a TV show where this hasn’t happened, the Wobbly Stool of Greatness* feels like it needs a beermat under the Character leg. It might be funny or entertaining, and the story might bounce along, but we’re not relating to the people onscreen. Fix that leg.

Equally I’ve read scripts where the characters are colourful/interesting/unboring, and it’s funny, but the story’s lacking. The fab Scriptnotes podcast read the first 3 pages of writers’ scripts. The fab Sitcom Geeks podcast read the first 10 pages. Both have complained regularly that by those first 3 or 10 pages, the story’s not got going. It’s understandable for the former – you might have a vague plot set up but little more – but if you haven’t got underway in ten pages, something’s up. Especially if it’s a sitcom. (A feature film script might still be setting the scene in the first 10 pages, but even then, that’s one helluva scene).

No. Get moving quicker. Even in a seemingly ‘slow’ TV show (Mum? The Royle Family?), story is happening all around. It’s just not as ‘big’ as car chases and assassinations. Instead it’s whether someone’s going to give someone else a lift, or whether someone should wear this shirt or that shirt for their birthday party. It’s all story. In Killing Eve of course, there are those car chases and assassinations. And each scene, each page, and pretty much each line, things move on. 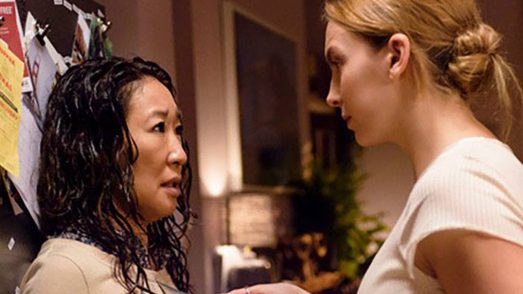 Killing Eve: A show in which things happen. A lot.

If not? Wobbly stool.

I’ve known drama script readers who still look for these three things, but instead of Character, Story, Comedy it’s Character, Story, Dialogue. Do the words sizzle off the page? Do the lines entertain, move or intrigue you? Each scene/page/line shouldn’t just reveal character and story – it should also give us a good time as we go. Otherwise this rollercoaster is a train track for ages, only dipping and thrilling for rare turns in the story/track. So let’s make the rest of it fun too.

It doesn’t have to be a laugh-a-minute (no that’s way too long to wait – laugh-every-ten-seconds) show like Not Going Out (I’m biased), Modern Family or Brooklyn 99. Going back to Mum, the jokes are subtler but they are there. It’s beautifully funny throughout. Critics will say it’s through character – and it is – but it’s also through cleverly crafted dialogue that is simply Funny.

Another off-peak example of three perfectly balanced stool legs is in BBC1’s daytime sleuthcom Shakespeare & Hathaway: Private Detectives. Who needs 2hrs for a Midsomer Murders when this show cracks through a convincing whodunnit plot in 44mins? The characters are a joy (Mark Benton’s Frank Hathaway is a downtrodden hoot, Jo Joyner’s Luella Shakespeare is a brilliantly spiky foil to Frank, and Patrick Walshe McBride’s fed-up actor-turned-secretary steals every scene) – and it certainly passes the cover-up-the-character-name script test. The story moves on apace, and it’s laugh-out-loud funny – in both dialogue and in great visual setpieces.

Test each line in your script for those three things. And meanwhile wonder at those shows where the Wobbly Stool of Greatness* is rock steady. Killing Eve? Not a beermat in sight.

*It has been pointed out by Jim Vine that a 3-legged stool can’t wobble. It can only slope or slant. While I want to blow a raspberry in his face, he is of course quite right. I should have done another pass at this blog for geometric sense.