“Chestnuts roasting on an open fire…”

Ah yes, like a Nativity scene artist who’s illustrating the accommodation, the nights are drawing inn. And in early November in Britain, that means Bonfire Night. Guy Fawkes Night. Fireworks Night. Whatever you remember remember to call it, it’s just the latest in a long line of wintry bonfire celebrations, going back far before we decided to commemorate a 17th century cutlery-named terrorist each November 5th. 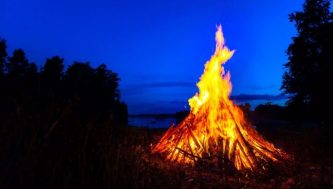 A bonfire. French for ‘good fire’.

Thousands of years before Christmas, there was Yule – one of the world’s earliest known festivals. It dates right back to the birth of agriculture. And for those who prefer to think of Christmas’ origins in the Holy Land, that’s ok, because agriculture started in the Fertile Crescent, smack in the middle of which, pretty much, is Bethlehem. Except it’s not the manger we’re looking at here, but the seeds growing beneath it. When the Ice Age ended, Earth’s larder defrosted and we learned to raid it.

But like all larder raids, sometimes you take too much, and for the first time we discovered what a food surplus looked like. Especially in the icy north, supplies were rationed but couldn’t be stored for long, so winter’s midpoint became the perfect time to bring out some grub, partly through necessity, but also because it’s good to pop a cork when the worst is over, when the sun stands still – translated as ‘solstice’.

But would the sun come back? Well yes. But what if it didn’t? Well it would. Ah but what if it DIDN’T? Alright, go and worship the sun then, see if I care! Go on, encourage it back by recreating sun on Earth. Make fire. Big wheels of fire to resemble the sun, how about that? Then have a big ritual where you roll it into the sea. 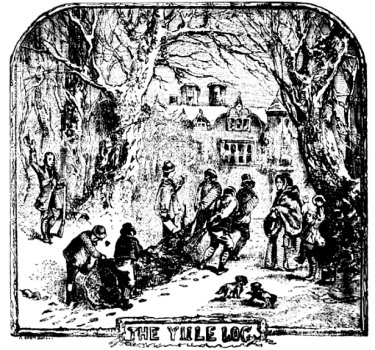 Should burn a while. You’ll spend a day trying to light it with newspaper, vodka and a pack of Swan Vesta though.

In the olden days – up till the 19th century – they kept this tradition, ideally burning constantly for the full twelve days of Christmas, now that the Christian festival had superseded the Norse Yule. But even the Yule log burns out eventually… and with industrialisation and the middle classes and city living came smaller fireplaces. They halved in size, with no room for that giant Yule log. Besides, Prince Albert had just helped popularise the Christmas tree, so we exchanged one bit of wood for another (no sniggering, I said!).

In Paris, city-dwellers particularly missed their Yule logs. After romantically staring at their small fireplaces for some time and composing some poetry (probably), they turned to what all good French people turn to in times of crisis: confectionery. Thus, the Bûche de Noel: they forced out their chocolate logs (NO SNIGGERING!). 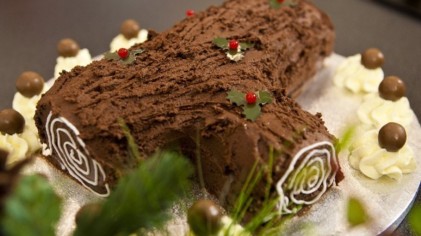 Don’t forget a proper chocolate log has a little stumpy bit. And a dead squirrel inside.

We may have stopped burning Yule logs, but we still like a roaring fire (pubs filled the gap, since most homes can’t provide any longer – though wood-burning stoves are coming back) – and then there’s the Yule log’s 2D return thanks to TV exec Fred Thrower.

In 1966, Thrower decided to “warm up” a few homes, as well as give his station staff some time off, by filming a log burning in the New York mayor’s fireplace. He then broadcast it on a loop for two hours, costing 4,000 dollars in lost advertising revenue. It became an annual hit running for twenty-four consecutive Christmases. Today the YouTube equivalents still garner millions of views, as we pretend our Yule log is burning away just as it did for centuries. Except rather than burn for twelve straight days, Thrower’s version burned for just seventeen seconds before looping around again. 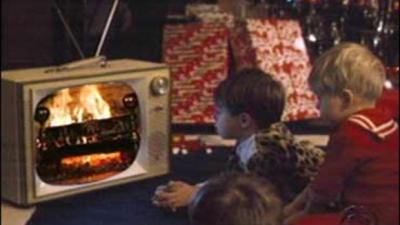 “Don’t turn over! This is my favourite bit…”

Meanwhile, our bonfires still burn every November 5th – and we still flock to the firework displays, our cotton-gloved hands getting all ketchuppy from hot dogs. One thing that never goes away is that yearning for communal gatherings in our wintry festivals, so whether it’s cheering as wheels of fire roll into the Scandinavian sea, gathering round a real log, a TV log or a French chocolatey one, or wrapping up warm for a Bonfire Night, fire has always lit up our winter nights – because Jack Frost is nipping at our nose.

My book Hark! The Biography of Christmas is available now and should not be burnt on fires for any reason. Stay safe, people.